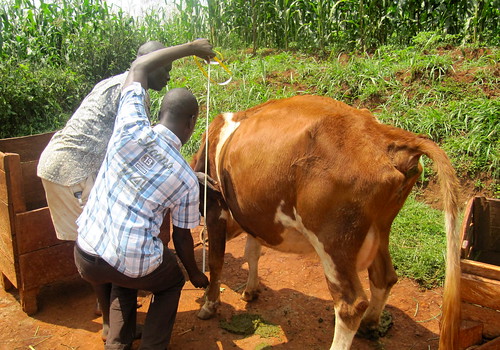 Filling the milking glass and having some left over cash is what every farmer craves. Measuring that profit however is a numbers game, a tough one for that matter as a team of researchers from the International Livestock Research Institute (ILRI) recently found out. They were challenged enough to seek a solution.

When researchers of the ‘Germplasm for Dairy Development in East Africa. Identifying appropriate germplasm and delivery mechanisms’ project set to collect farm productivity data during phase 1 of the project; they knew it would be tough.  Smallholders in the region usually downplay the function of record keeping. The project simply referred to as Dairy Genetics East Africa project (DGEA 1) required that information on farm size, type of farming practiced, number of dairy cows held on the farm and their breeds, daily records of the amount of milk produced by each cow, pregnancies, calving and the growth experienced as well as diseases that may strike be constantly monitored.  This would help to map out the best performing breeds in the various environmental conditions and farming systems. Performance is measured in terms of amount of feed consumed compared with the amount of milk produced. Resilience to disease is another important factor.

The overall objective of DGEA 1, was to gather information and create partnerships and business models ready to implement in envisaged later projects that will sustainably develop and deliver appropriate genotypes to smallholder dairy farmers in East Africa and assist implementation elsewhere in the developing world. (Genotypes are the genetic makeup of an organism or group of organisms with reference to a single trait, set of traits, or an entire complex of traits). ILRI partnered with PICO-Eastern Africa and University of New England to deliver this project.

One of the researchers, Absolomon Kihara says they printed milk record-keeping books and trained the farmers on how to fill them in, on a daily basis. This was to help capture the milk production information which would later be used to understand the optimal production of each breed in its environment and whether any interventions were necessary to build a viable milk business.

Unfortunately, long after the end of the project, that information was still being transferred from the manual records kept by the farmers to electronic records that would be used for the analysis. What was the reason for this?

Four events conspired to make it almost impossible to get reliable data quickly. The first was the lack of a standard measure of milk recording. Some farmers used cups, others jugs, others the litre. Converting records from nearly 2000 households over a two year period proved a daunting task. The second event was the illegible records and kept by some farmers and finally there were farmers who were simply not compliant. They saw no need to keep records! When the enumerators assisting with the project visited the farmers once a month, there was little they could do to arrest the situation. Finally the process of data transcription was a slow painful task which took over 6 months to key in, due to the sheer amount of data collected.

The system envisages the farmer taking charge of their own production recording…Ng’ombe Planner is designed to record milk production, fertility, calving, curative measures undertaken and general preventive treatment such as dipping or spraying. It then provides feedback to the farmer where necessary.

In these challenges, they saw the opportunity to create ‘Ng’ombe Planner’. Ng’ombe is the Kiswahili word for ‘cow’ and this tool is created to help collect farm productivity data by enabling farmers to enter their own records on what is happening on the farm. The tool is designed to work with any mobile telephone that the farmer has. It runs on three platforms – Android, Java and on any other mobile phone through the USSD application. Ultimately, it should ensure effective data collection and integrity.

‘The system envisages the farmer taking charge of their own production recording’, Kihara says. ‘The site coordinators will walk the farmer through the system and then leave them to enter their own data,’ says Kihara.

The site coordinators will also monitor the farmers’ progress and capture any challenges and feedback from the farmers. This will be used to improve the system over the time. Ng’ombe Planner is designed to record milk production, fertility, calving, curative measures undertaken and general preventive treatment such as dipping or spraying. It then provides feedback to the farmer where necessary. For instance, if a farmer enters information suggesting that a cow is on heat, the system sends out alerts to the site coordinators so that the nearest artificial insemination service is made available. Where the farmer indicates they would rather use a bull, a notification with the nearest bull providers is sent to the farmer. Similarly, reminders and alerts are sent out to remind the farmer when a specific activity is due, for instance reminders for farmers to record milk production or to look out for a cow that should be coming on heat.

Kihara adds that they are piggy backing on the DGEA project sites to test the system with farmers who are willing and have shown interest in recording of farm records.  The system is currently being piloted in 5 DGEA sites in Western Kenya.